The Monotype Composition Caster uses water to keep the mould and surrounding area cool, and the caster is fitted with two valves to control the water flow. The main valve just controls the overall flow. Most of the water flows through a passage in the caster’s table under the mould and then runs through a diverter valve and into the coolant drain. By restricting the diverter valve, some of the outflow from the table passage is forced through the mould itself, and from there goes to the same drain.

These valves are weir valves, meaning that they have a barrier (the weir) between the inlet and outlet which the flow must go around. A rubbery diaphragm is pressed against the weir to pinch off the flow of water. As you tighten the stem this pinches harder ultimately cutting off the flow entirely, and as you open the valve the water pressure raises the diaphragm to allow flow. As you open the valve further, a button that forms part of the diaphragm is pulled up to further increase the flow. 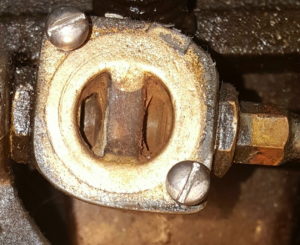 The body of the diverter valve. The water enters on the right, passes over the weir (vertical bar in the center) and leaves through the outlet on the left.

These valves are between 60 and about 110 years old and the diaphragms have become very hard, to the point that the low water pressure in the cooling system is not enough to open the flow up, and the stem has to pull on the button to allow flow.

The diverter valve on my caster was stuck shut. It turns out that the diaphragm had hardened in the closed position, and trying to open the valve just pulled the button off the diaphragm. 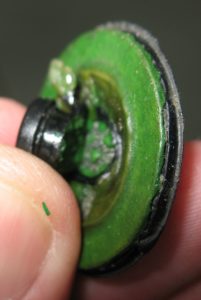 I replaced the diaphragm with disc of plain 1/16″ silicone rubber. I also made a washer from boxboard to add some thickness to ensure the perimeter would seal. This has no button on it, so I made a plug of epoxy putty to fill the socket in the end of the plunger and smoothed it off to a dome shape with files/sandpaper. The valve can no longer pull the diaphragm open, but the diaphragm is soft enough that the water pressure should be enough to open it (unless it sticks, do not store with the valve closed tight!). 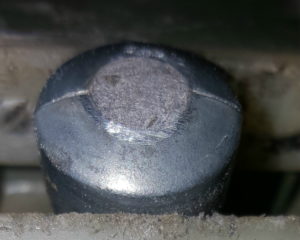 End of plunger with epoxy filler in place and smoothed down 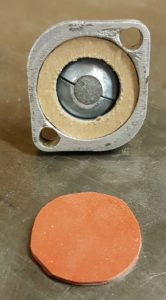 The assembled cap with the plunger filler button and boxboard washer in place, and new diaphragm below

I had previously had problems with the main coolant valve being hard to adjust, and was also frustrated that I could not turn off the water without losing its setting, so I had replaced these with a combination of a ball valve (to turn the water on and off) and a needle value (to regulate the flow). The needle valve unfortunately had compression fittings and everything else here was pipe thread, so I made some adapters and soldered then into the compression sockets of the value. The adapters were made from standard 1/4MPT unions, using my lathe to turn one end to fit the compression socket. 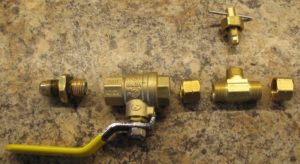 Needle valve and custom adapters, ready for soldering in

Now the diverter valve operates easily, and I can use the needle valve and ball valve to independently adjust the overall flow and shut the water off completely. 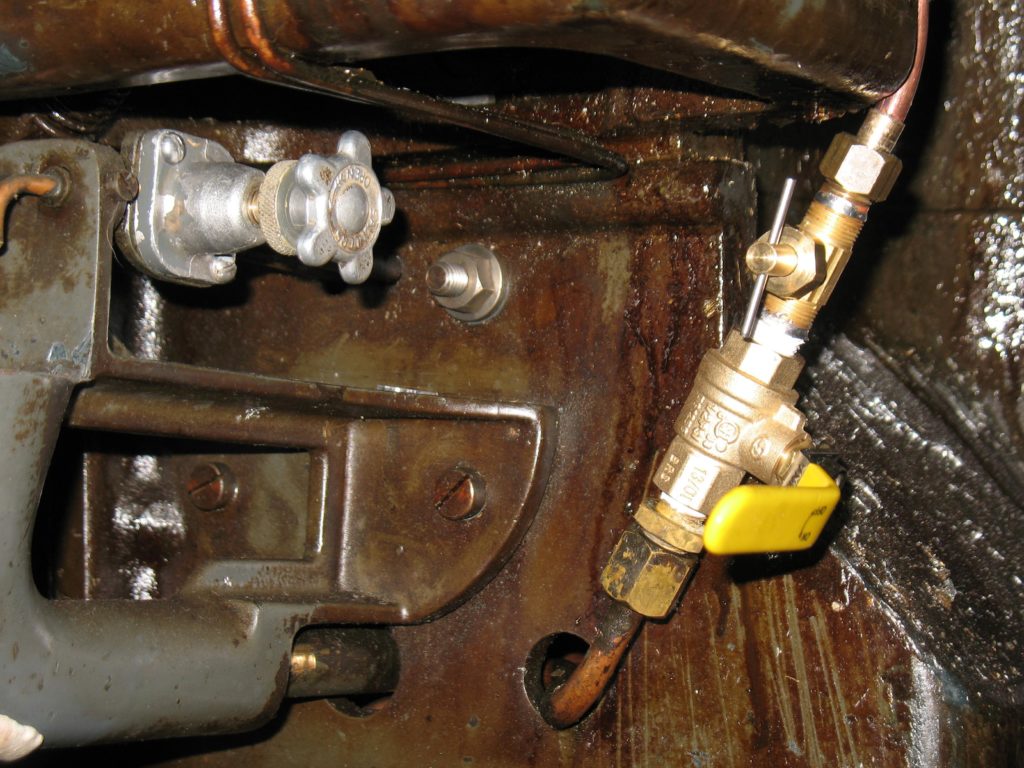 Here is a bit more information on the valves:

The valves are “SAUDERS” weir valves, type ‘A’.
The body appears to be zinc or perhaps aluminum though some parts (like the stem) are plated brass.
These have the “rising handwheel” style of cap.
The diaphragm is round, about 1.08″ diameter, and the button is about 0.375″ diameter.
The cover screw rectangle is about 0.9×1.03″. Note that the diaphragm is round and pinches in a recess in the valve, and does not engage the cover flange or screws.
The ports are FPT perhaps 1/4″ or perhaps smaller.

The brand still exists and similar valves are still made. There is a website for them but it does not appear to cover this particular product. Considering the sorts of environments these valves are designed for, they are way over-built for their use in these casters.