Aside from my peripheral involvement at KwartzLab, I have also recently been going to meetings of the local Maker Club with Lily. These meetings are held regularly at THEMUSEUM in downtown Kitchener on the second Wednesday of each month, but there was also a special project meeting last weekend.

The regular meeting last night had a hallowe’en theme, of course. The kids made “spiders” by stitching two cloth gloves together with stuffing inside and decorations outside. We kept the thumbs on our gloves, so Lily’s spider has mouth parts as well. There was also a second project, to make a mask from cutout card stock. The standard pattern was a bit large for Lily and I had to spend some time adjusting the shapes so we only had time to get partway through that one. 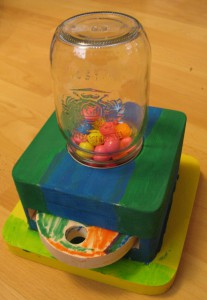 On the weekend, we made a simple gumball dispenser from pine boards and a canning jar. The kids got to use (with the help of a parent) power tools including a scroll saw, belt sander, drill, hole saws, and a power screwdriver. To dispense the gum, just give the disc a full turn and the gum will fall out of the hole. Everything was decorated with acrylic paint, except the disk where markers were used instead to avoid jamming the insides with paint.

Over the weekend, 41 gumball machines were made during four crafting sessions.