Posted on 2016/12/30 by kpmartin Posted in American Typecasting Fellowship, Conferences and Meet-ups, Kevin, Past Events — No Comments ↓

Actually, there was no official Day 4 for the conference, but the Bixler foundry in Skaneateles and Virgin Wood Type in Rochester both had open houses again for those would couldn’t make the other times. Rochester was on my way home so I stopped off at Virgin to see their facilities.

They are located in a residential cul-de-sac, backing onto some freeway or other, with the dusty mechanized cutting taking place in the garage, and everything else in the house. The faces are cut using a router pantograph with a fixed spindle and moving work table. Several pieces of type are cut at once and later cut apart during finishing. 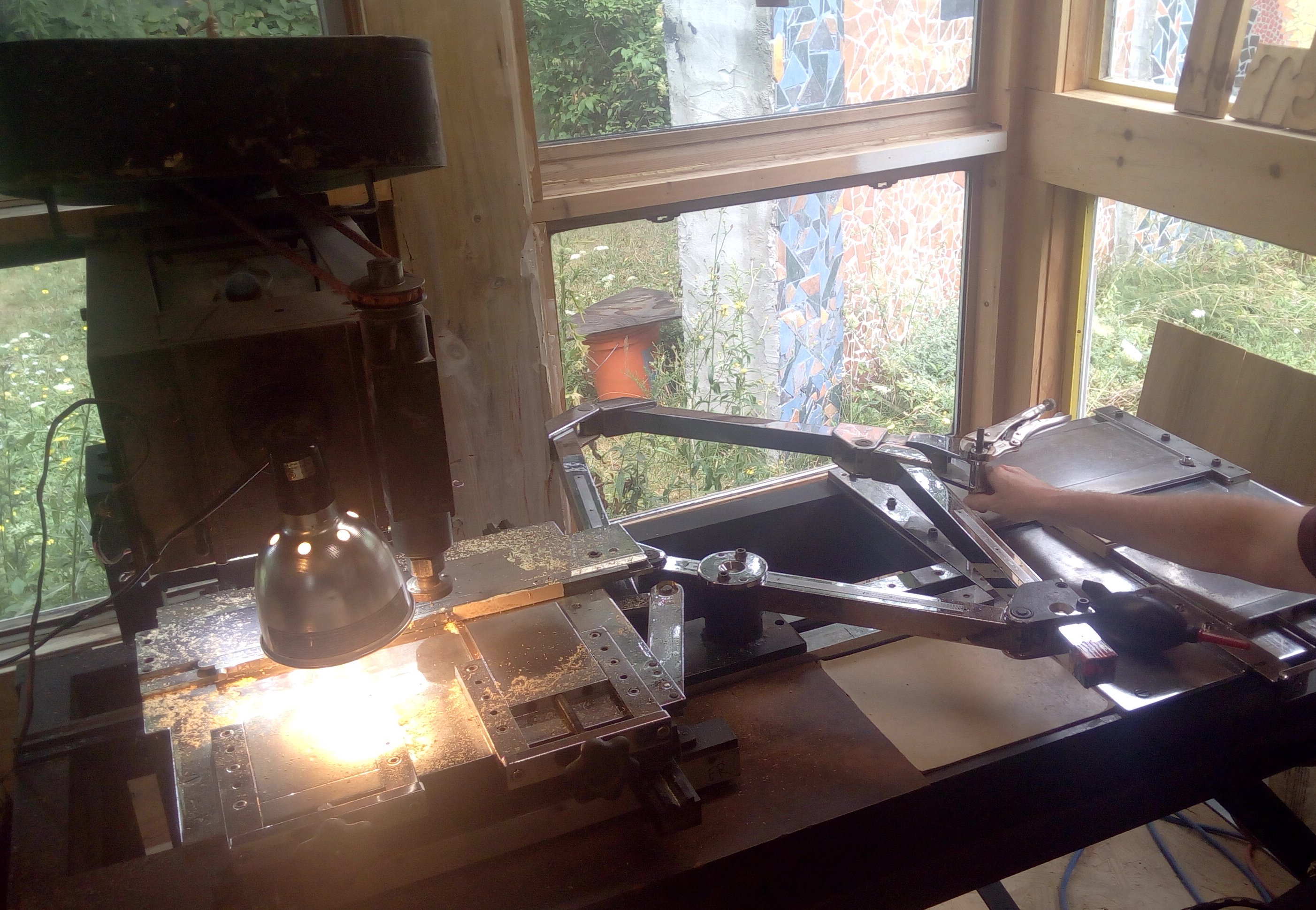 The pantograph: the spindle is just to the right of the lamp reflector. The tracer (in Jim Grieshaber’s hand) moves the work table through the linkage arms. A foot pedal raises and lowers the spindle.

The patterns for cutting are typically made by laminating cutout shapes (usually of thin plywood) onto a base. The cutouts are sometimes made by hand, but can also now be cut using a laser cutter. They have to be thick enough to resist wear from repeated passes of the tracer, and also to prevent the tracer from jumping up over the edge.

Although the wood used to make the type is end-grain, there is still a bit of wood fibre attached to the edges of the letters, so after separating the letters, the next step is to clean up the fuzzy edges left by the router bit. This is done by hand using a small fine flat file for the straight edges. The trick is to remove the fuzz without rounding over the edge.

Another finishing step is to clean up the inside corners which are too sharp an angle for the router bit to reach. For obtuse angles this is done with a sharp knife, but for acute angles a special punch is used. In either case the trimming is done almost by feel off the adjacent straight cuts so the trimmed edge aligns with the rest of the router cut.

When the type is finished, proofs are taken using carbon paper (so as not to ink the new type) on a flatbed press and the proofs are inspected prior to approving the type for shipment.

One product they have are chromatic faces, where there are two pieces of type for each letter, to be printed using transparent inks of two colours. The printing areas of the type overlap, so you get not only the two original ink colours, but also areas which show the combination of both colours. Although this could be extended to more than two colours, they’re currently only producing a two-colour version. There is an illustrated example at Virgin’s web site. These are made from a single multi-layer pattern to provide consistent register between the colours.