Posted on 2013/05/03 by kpmartin Posted in American Typecasting Fellowship, Equipment Acquisition, Repair, and Maintenance, Kevin, Other people — No Comments ↓

Last year at the American Typecasting Fellowshsip Conference Jason Dewinetz mentioned that he had a Ludlow Supersurfacer with a broken clamp spring.

The Supersurfacer is used to smooth off the surface of slugs cast on a Ludlow, which is essentially a manual linecaster: You put together a row of mats and cast an entire line of type as a single piece. If you are casting large sizes the cooling and hardening of the metal produces faint lines on the face of the type, which in turn show up on the printed page particularly if you are using kiss impression. The Supersurfacer is essentially a surface mill with a carriage specially made for holding the Ludlow slugs and removing a tiny amount of metal, leaving a perfectly smooth surface.

There is a torsion spring which helps hold the slug clamped in the carriage, and the one on Jason’s machine was broken. I have a Supersurfacer (even though I have no Ludlow) so I offered to try to make him some replacement springs using the spring from mine as a model.

This is the spring from my Supersurfacer with most of the grease and grime cleaned off. Overall the spring is about 1” diameter by 3.5” long.

After some experimentation I made an arbor and determined a winding pitch that would produce a similar spring. I wound them on my Myford ML7 lathe and had to play some tricks with the carriage feed gearing to get the pitch I needed. A wire bending jig was used to form the eyes at each end of the spring. Finally I plated the springs with nickel to match the apparent finish on the original spring. 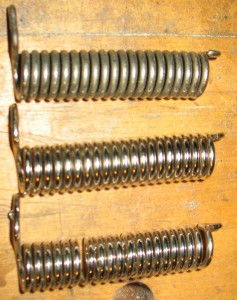 The bottom one was the first try. Some hesitation in winding made the spacing come out uneven.

They don`t look identical to the original but they fit and work in my Supersurfacer, and I`ll be sending them off to Jason in the next few days.