Proof presses are subjected to a lot of sideways forces when used, caused by the carriage hitting its stops at either end of its stroke. These can be reduced by slowing down near the end of the stroke, but there are times when you’re in a hurry or just plain forget and the carriage hits its bumper springs with enough force to move the whole press along the floor a bit. After a while you may find that the press has moved halfway across the room!

To avoid this, you can place rubber pads under the legs of the press, and I believe this is actually recommended in the manual for the press. I added some pads to my proof press today. I used rubber floor matting ¼″ thick cut to 3½×7″ which is ½″ larger than the feet of the press in both directions. I cut two pieces for each foot (eight pieces in all) and used a spray contact adhesive to glue them back-to-back in pairs.

I jacked the press up with the pallet truck, sprayed more of the adhesive in the center of one surface of each pad, positioned them under the feet of the press and lowered the press onto them. They have a very trim appearance, showing ¼” of exposure all around each foot.

In addition to preventing the press from sliding on the floor, they also provide a little give in places where the floor is not quite flat, so the press is less likely to wobble on two opposite legs. 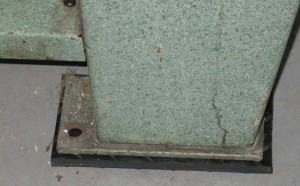