Repairing the other Monotype nozzle

While trying to do some composition casting recently, I concluded that the nozzle on my caster was worn or damaged, causing it to leak profusely, and the spare nozzle I had on hand was in even worse condition. I repaired one of them using my lathe, but it was not until today that I got the other one fixed up. 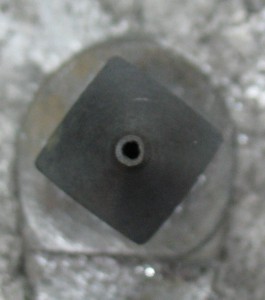 Worn nozzle. Note how outer diameter of tip has a flat spot on the right side.

The nozzle that I had already repaired was not marked with any number, but the one I fixed today had a square body and was marked #18. This nozzle is supposed to be for use on American casters to cast composition under 9 points. After truing up the outside of the tip, I tried redrilling the hole and found that the drill went right in without cutting anything. It turns out that the hole is a few thousandths of an inch oversize and a bit out of round, probably from being cleared out with a hand drill too often. 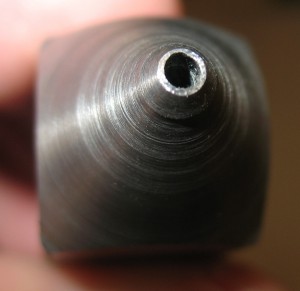 The refinished nozzle tip. Note that the outer rim of the tip is now round, assuring leak-free operation. However, the hole is out of round and shows a ridge inside it. which may cause turbulent flow of the metal jet.

Although the refinished outer surface means the nozzle should once again seal properly under the mould, the rough hole might result in a less-than-ideal stream of type metal entering the mould.

I also checked the diameter of the hole from the base of the nozzle, and found that its diameter was about 0.129″ (exact measurement was difficult because of the coating of type metal and slag lining the hole). This means that the back hole has been drilled out, since it should be 0.096″ on a #18 nozzle. The redrilled hole means the nozzle is now actually a #22, to be used with American casters for casting composition type 9 points and over.

I should therefore finish the job by re-stamping the nozzle with its new number.