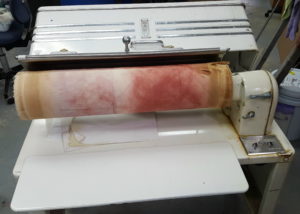 We have a near-antique Easy brand ironer (also known as a mangle). This has a cloth-covered roller and a heated platen that presses against it, and it would have originally been used for ironing (typically) large items like bedsheets. We now use it occasionally for flattening paper or marbling, for quick-setting the internal AKD sizing in freshly-made paper, and for drying a small batch of paper for something like a colour test.

The cloth-covered drum rotates upwards on the front, pulling the item to be ironed over the top of the drum and under the platen which presses against the back of the drum. There are controls to temporarily pause the drum rotation, to raise and lower the platen, and to control the platen temperature. Our drum is a bit stained from a series of colour tests we did with Red 101 pigment.

A while back, the ironer stopped working as its motor (mounted shaft-upwards below the gearbox at the right-hand end) fell off and was just dangling by its power cord. 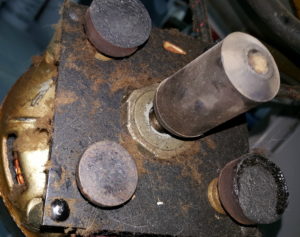 The motor is mounted using rubber anti-vibration mounts and also has a rubber coupler on its shaft, for quiet operation of the machine. The rubber mounts had all failed from a combination of aging of the rubber and oil absorbed from gearbox leakage.

The old mounts had a 1⁄4NF-28 stud on the top end threaded into the gearbox housing and a 1⁄4NF-28 tapped hold on the bottom end to receive a bolt through the motor mounting plate. 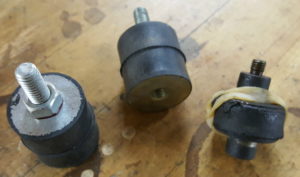 I couldn’t readily find identical rubber mounts, so I purchased something about the same size and proceeded to machine them to suit. The mounts I purchased were longer than the original mounts, had a 5⁄16NC-18 stud on one end, and a 5⁄16NC-18 tapped hole on the other end.

My plan was to modify the stud to provide the correct overall length and fit the tapped holes in the gearbox, and refit the motor with 5⁄16″ bolts to replace the original 1⁄4″ ones.

The overall length of the new mount was a bit short, so I started by adding a nut to the stud, and affixing it with some permanent thread locker, which you can see as a trace of red where the nut presses against the mount.

On the lathe, I faced and turned the nut to provide an appropriately-sized standoff. This would not only give the mount the correct overall length, but it would also avoid fouling with the sheet metal of the main table.

Then I turned the base of the stud to 1⁄4″ to allow its eventual rethreading. This did not completely remove the original stud threads but it was good enough for the smaller threads to work.

The workholding wasn’t strong enough to use a parting tool to shorten the stud, so instead I turned down a portion of it to form a neck, then used a hacksaw to actually cut off the excess length. This was following by facing and chamfering the cut end.

I used a 1⁄4NF-28 thread cutting die, held square by the lathe tailstock, to actually cut the threads. 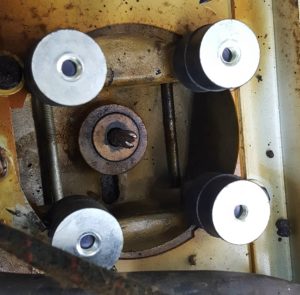 The replacement mounts fit well on the underside of the gearbox. The standoff is long enough and small enough diameter to clear the sheet metal of the table top. There is also enough room for the knee-operated platen control (hiding under the wires in this photo) to operate properly. 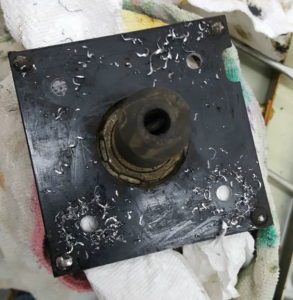 I drilled out the holes in the motor mounting plate to fit the larger mounting bolts. Paper towels and regular towels were put in to prevent the chips from falling through the ventilation holes of the motor.

There is limited depth to the threaded holes in the rubber mounts, so I added an extra washer to the new bolts to take up the extra length.

Although the job we needed it for was since done in another way, the ironer now works properly again, and the new mounts should be good for another half-century.