New to us, anyway, as it is older that the one it is replacing. This one is a Challenge Diamond 32″ guillotine with mechanical cut and manual clamp. 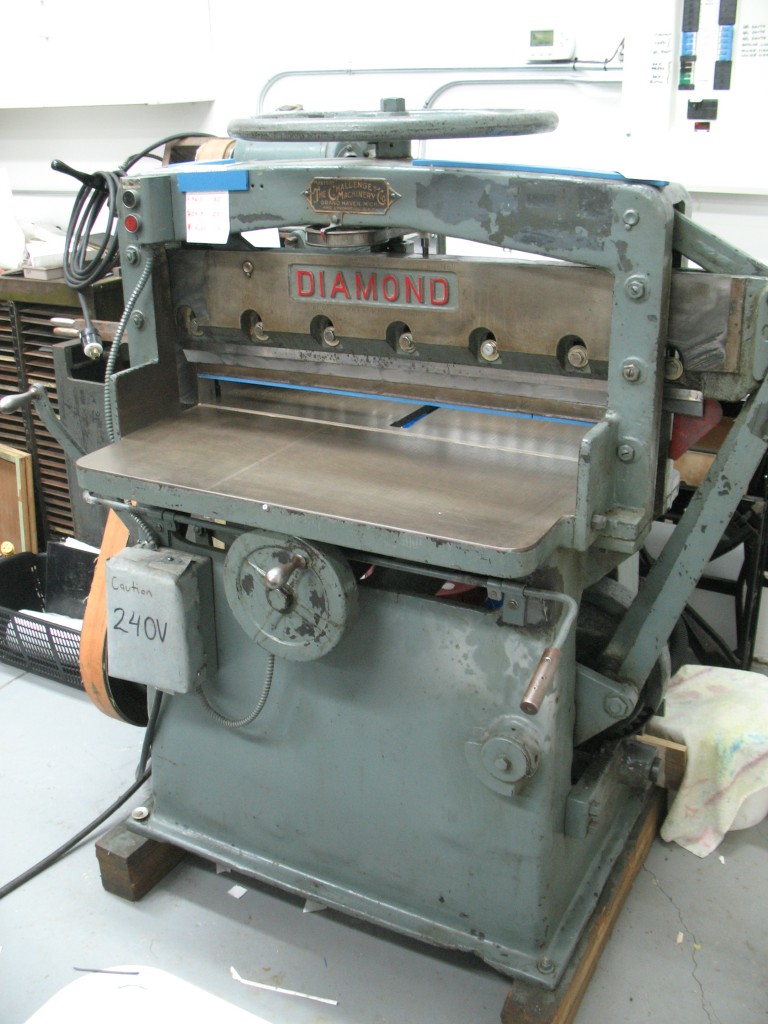 This machine has an after-market dual-hand control added so you have to have both hands away from the cutting area to initiate the cut, but once started the cut completes even if the handles are released, so if you move fast you can still cut off your fingers. It does not show from this angle, but the motor is mounted above the left of the back table (a bit visible below the clamp wheel) and a 3″ flat belt drives a flywheel and clutch at the lower left (again, part of the belt can be seen). Some day I should make a guard to cover that belt. 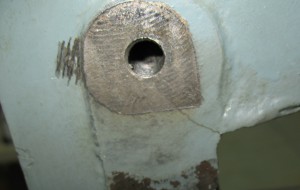 A small stress crack runs from the inside corner where the leg meets the arch and ends within the threaded bolt hold.

The machine needed some TLC when we got it. A lot of it was just cleaning things up, but there were also adjustments to to motor mount so the belt would run true, adjustments to the dual safety controls, and some repairs to the arch. On these older models, the arch (the curved part across the top) and its legs were cast as a single unit and with age tended to develop shrinkage cracks in the upper corners. This one had small cracks in three of the legs, and the fourth leg was broken through. This was repaired with epoxy, which appears to be strong enough to withstand the cutting forces involved. If it ever breaks I will drill vertical holes over each leg and insert a bolt, which is in fact how the newer cutters are constructed.

The area where the safety control had been attached turned out to be a void in the casting still filled with casting sand. Evidently the base of this machine was cast upside down and some of the casting sand came loose and lodged at the bottom of the mould cavity, which ultimately becomes the leg at the top of the base where the table mounts. I cleaned out all the sand I could and filled the hole with epoxy metal filler before drilling and tapping a new mounting hole.

The reasons we switched to this guillotine are mainly that we use (or perhaps it could be said abuse) it to cut up pulp sheets for shipping, and we found that most of our pulp sheets were just a bit too wide for the old 26″ cutter. Furthermore this motor runs natively on 240V single phase power, while the 26″ one has a three-phase motor and uses a VFD to run the motor on a single-phase power supply.