…why the Monotype manuals say not to raise or lower the pot unless it is molten. They never explained why this could cause any problems, and the pump piston linkage is jointed enough to follow the pot up and down with no trouble, so I never gave this much heed.

It turns out not to be the pump piston linkage that is the problem, but the pump lowering lever. If the metal hardens when the pot is not fully up in its operating position, the pump will be frozen in the metal in a raised position. If you then crank the pot up to operating position without fusing the metal first, the lever that lowers the pump away from the mould will break. 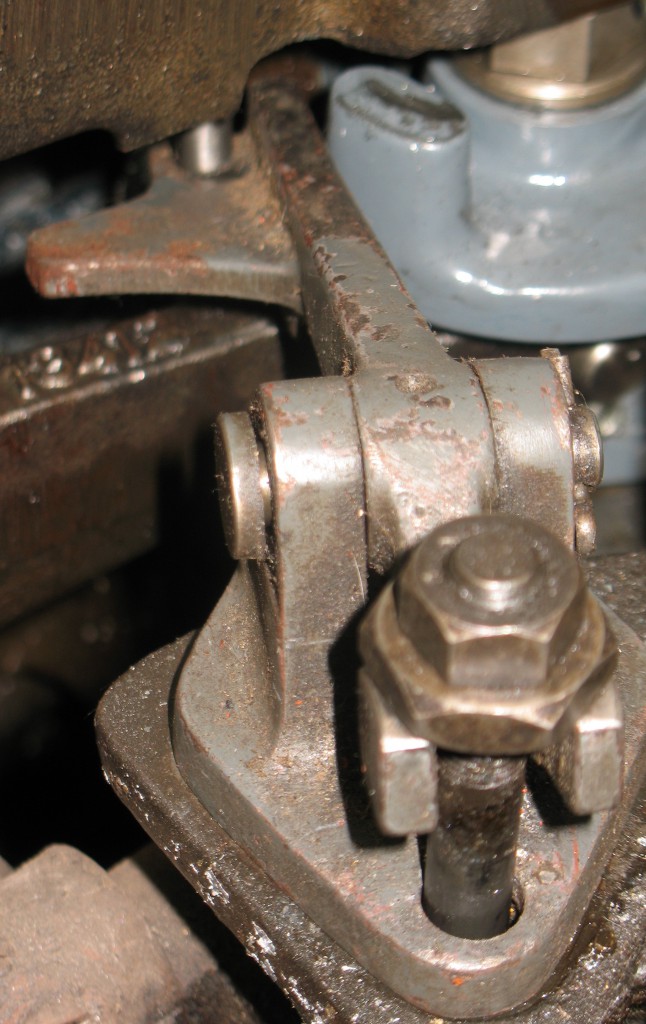 The pump body lowering lever. The far end is pressed down by the shiny rod, lifting the nut in the foreground, thus lowering the pot. When the rod lifts, a spring pulls the pump up. Normally this happens as the machine is about to fill the mould, but this also happens if you lower the pot.

If you raise a solid pot, the rod will push down, but the pump can’t move so the nut can’t move up, and this lever breaks instead

Fortunately I have some spares of this lever. Also fortunately, this lever breaks rather than the ones that actually support the pump body; there are two of these and they are much more trouble to replace.

Because the pot is so heavy, the crank to raise it has a large mechanical advantage, so the force required to break this lever isn’t even noticeable.

Although this happened to me with a pot that solidified in a lowered position, it is also possible for this to happen if you raise a pot the had hardened in the raised position and has since been lowered. This might occur if, for instance, you have adjusted or replaced parts of the pump body lowering linkage.