This week I was having another look at the pneumatic solenoid valves I want to use to run my Monotype from a computer. I was somewhat disappointed that the valves I had were the Normally Open (N/O) type and designed for higher pressures than I would be using.

While doing some tidying up I noticed that the valves did not all have the same part number on them!

The original valves I tested were BX758DE2A324, rated for 0-8 bar (0-120PSI) and normally-open operation, but the ones I noticed lately were BX758DE1C324, rated for 0-4 bar (0-60PSI) and normally-closed operation. A quick examination of all the valves revealed I had six of each of these, and six BX758XX2A3JJ (0-8 bar N/O but not sure about these other than JJ means special driver electronics are required to control the solenoid power).

I tested one of the newly-found valves and it did indeed seal properly in N/C mode, which is great because this will substantially reduce power consumption and heating of the valves. Unfortunately, despite the lower pressure rating, their flow at 20PSI when open varied between almost none and barely adequate, as it did with the first valve I tested.

I took apart the valve and found, as I expected, that there was more pressure from the spring push rods holding the valves closed. Opening the back of the valve to remove the springs revealed the difference: 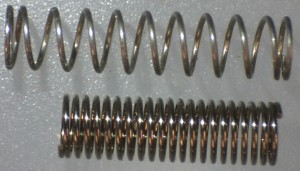 These springs are tiny, about 2.7mm (0.106″) diameter. The lower spring is the weak one from the N/O valve. It has many coils and is thus a soft spring, and when installed it is hardly compressed at all, thus generating little force holding the valve closed. The upper spring is the strong one from the N/C valve. It has fewer coils making a stiffer spring, and its longer free length means it is compressed on installation, generating a much stronger force holding the valve shut. The spring push rods are identical in the two valves.

Both springs are made from the same wire. As an experiment I stretched one of the soft springs from the N/O valve and trimmed off the excess turns to make a spring resembling the one from the N/C valve, installed it in the valve and tested it. It gave a good seal when closed.

Thus is appears I have the N/O vs. N/C problem solved. I have six valves manufactured for N/C operation, and six more that I can convert to N/C by altering the springs. Twelve valves are enough to make 3 control units to run 3 casters.

As for the airflow in these valves, I charted the shutter thickness against subjective air flow as I had done with the first valve, and found a similar relationship between the values. One difference is that in the N/C valve, the shutters appear to be about 0.05mm thicker for a given airflow than those in the N/O valve previously tested. This much thickness difference would amount to about two units of airflow difference so on the assumption that the second valve has more space in it allowing good flow with thicker shutters, I’m going to be trying swapping shutters between valves to see how it affects air flow.

So for my attempts to shrink the rubber seals on the shutters, keeping them in boiling water for several hours (the mildest way I could think of to force out absorbed oils) had no effect.