After refurbishing the rear air pin block on my Monotype caster, I am now doing the same to the front pin block. Disassembly is a bit different from the rear block, because the front buffer must be removed in pieces: First the buffer spring and its rod must be removed along with the right-hand buffer jaw. Once that is done, the two sets of tongs and the pin jaws can be removed. A small cover at the right end of the pin block can also be removed, revealing the head of a bolt that holds the buffer itself in place, which in turn holds the matrix jaws.

If the two taper pins holding the pin cover can be punched out from below, the cover could be removed without removing the matrix jaws, since the cover plate can be lifted up a bit and slid forwards to remove it. However, punching out these pins is a pain to do, since it requires reaching through the trap door of the base of the caster with a very long punch, locating the two pins in the gloom of the underside of the table, and striking the punch with a hammer before it slips off the pin. The only view you can get is with a mirror, and whatever light you have shining up within the base is trying to blind you as you peer into the mirror.

The other alternative is to remove the matrix jaws, so the pin cover and the two taper pins still wedged into it can be lifted about an inch until the taper pins clear their holes. Both the front and rear pin covers have tapped holes into which small screws can be tightened to lift the cover so no prying is required (I wish I had noticed these before prying off the rear cover). But removing the matrix jaws required removing the rest of the buffer, which is held in place by three screws as well as the bolt hidden under the cover. The bolt is a further nuisance because as wrench only has clearance to turn it ⅙th of a turn at a time, and it never become loose enough to turn by hand. Removing the buffer and matrix jaws also gives access to service the front rack. 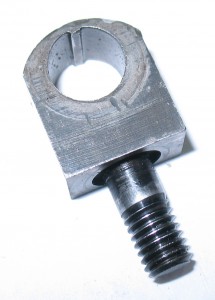 One problem I should address is that the support for the right-hand end of the guide rod for the pin jaws is worn. I’m reasonably certain that ridge shouldn’t be there, but I’ll see if I have a spare of this part to compare. The end of the guide rod is split, and a screw is supposed to tighten into it, spreading the split halves and making the rod fit tight in this support. On my caster the screw is missing, so the rod is free to rattle around in the support hole, and as a result it has worn its hole larger. The ridge is an unworn strip matching the slot in the split end of the rod. If I don’t have a spare for this I think I should be able to make a replacement from scratch. But I really need to replace the screw that spreads the end of the rod (and in my rear pin block as well). It is not yet clear to me if the threaded hole in the end of the guide rod is tapered, or if the screw that belongs there is tapered, or both, or neither but the screw has a wedge-shaped head. Perhaps I have a spare of the rod and it still has its screw.

I now have most of the parts from the front pin block cleaned, and it seems that several of the holes in the cover have some sort of burr or turned edge that prevents the pins from rising. I will have to use my adjustable reamer to remove this burr, or perhaps a deburring tool can be used to lightly chamfer the top of the holes.