After disassembling and cleaning the front pin block parts, I noted wear on the Pin Jaw Guide Rod Support, as well as on the guide rod itself. Furthermore, there were several holes in the cover plate that seemed to have a burr preventing the air pins from rising.

Some searching through my spare parts turned up an apparently new guide rod (and two others as well), and another cover plate with the guide rod support still attached. I cleaned these parts up and compared them to the parts I had removed from my caster. 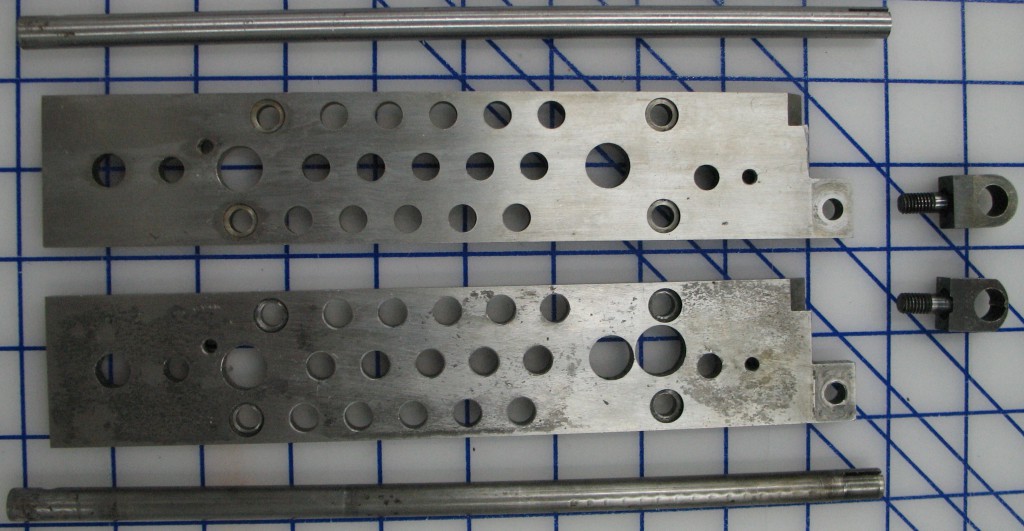 Spares at the top, originals at the bottom

The cover plate cannot be substituted because the spare I found does not have the extra hole for the Unit Shift actuator piston. I could drill a hole there myself but I decided to rehabilitate the original cover plate instead. This plate shows corrosion pitting, so I assume it has rusted at some point. It is possible that the burrs in the air pin holes are from excessively aggressive attempts to remove the rust with a wire brush. There are brush marks in the metal, but these also exist in the spare I found so that could also be the factory finish. I used my drill hole deburring tool to chamfer the upper edges of all the air pin holes, and now the pins all move smoothly. 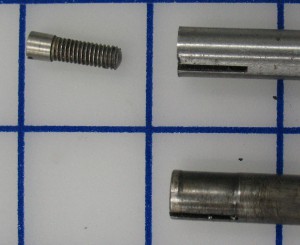 The spare guide rod I found included the special screw used to spread the split end for a tight fit in the support. I have noted the dimensions of this screw and will be making another to use in the guide rod for my rear pin block. The end of the original guide rod is visibly worn, matching the wear in the original guide rod support, both caused by the absence of the wedge screw allowing the rod end to move in the support’s hole.

A close examination of the rest of the guide rod in the first photo will also reveal a series of wear spots corresponding to the 15 positions that the right pin jaw takes up as the machine runs. I will examine this jaw for any bump or burr which might be causing these marks, but they could just be due to ongoing lack of lubrication.

The spare guide rod and support will be used to replace the worn ones removed from the caster. The parts are now ready for reassembly, which will be covered in an upcoming post.