Making a phone adapter for a tripod

There are a couple of videos I’d like to record. My current camera is 14 years old; it still works fine, but its video quality is poor by modern standards, so until I decide to buy a new camera I thought I could use my phone to record some video. That, however, requires some way of aiming the phone and holding it steady.

A year or two ago I bought a “Steelie” mount for my phone from Lee Valley Tools. This consists of a ring-shaped magnet that is adhered to the back of the phone, and a steel ball that attaches elsewhere (clipping to the heating vent on my truck in this case). The magnet clings to the steel ball allowing the phone to be oriented any way you desire.

Although Lee Valley sells some other Steelie accessories, they don’t have a tripod mount. So I made one.

I started with a 25mm steel ball bearing, into which I tried to drill a hole. Well, ball bearings are really hard steel. Even after trying to anneal the ball by heating it to red heat and cooling it slowly, I was barely able to drill a hole in it. I destroyed a few drill bits before finding that I could use a 1/8″ solid carbide endmill to make the hole.

I turned the end of a short piece of 1/4-20 threaded rod to fit the hole I had hacked into the ball, and brazed the two together. I also polished off most of the scale left on the ball from the annealing attempt along with the flux residue from brazing.

This gave me a male 1/4″ thread mount for the phone, but to fit a standard tripod mount, a female thread is required. I also wanted to elevate the phone so it could face forward in portrait orientation with the tripod in its normal position. I made a sort of mounting post by tapping 1/4-20 threads into both ends of a short piece of 13mm (½″+) aluminum round rod. The ball end screwed into one end of the post and the tripod’s camera mount screwed into the other end.

This particular tripod, though, had a rather wide slot for the camera screw to slide around in, and the rod I had made was very close to dropping into that slot and jamming, so I added a wider base to the rod (it is just a press fit). 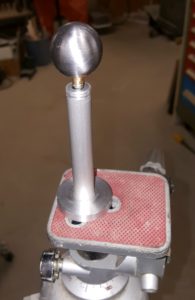 Here’s what it looks like with the phone attached, from the subject’s viewpoint and from behind the camera: 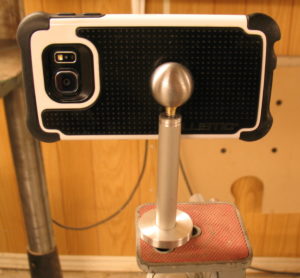 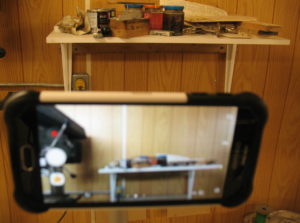 Because the ball mount is so easy to turn, a remote (Bluetooth) shutter release is a must. The mounting magnet is also not quite at the phone’s center of gravity, so if you jostle the tripod one end of the phone will drop, giving crooked images. I am still considering ways to increase the friction of the magnet mount—it has a rubbery pad in the center to provide some grip but it isn’t really sufficient.