How Not to Make Matrix Blanks

The Lanston Monotype display matrices are essentially rectangles of brass (or aluminum) approximately 1⅛×¾×0.094″ with two corners cut off at an angle. It would seem that the best material to start with would be 1/8×¾″ brass strip, and the first step would be to mill a total thickness of 0.031″ off both faces to produce smooth surfaces and the desired thickness. Both faces have to be milled because the surfaces of the strip as purchased are a bit uneven, and both surfaces must be smooth and parallel to be able to make engraved matrices.

When I tried to do this, the work setup I had was to hold the brass down on the mill table with two metal bars bolted to the table. I would be able to work the length between the bars, then loosen the bars and move the strip along to work on the next section.

This shows the bar set up for cutting the second section. The circular edge towards the left clamping bar is the end of the previous section’s cut.

Although this setup allowed me to mill off the rough factory finish, it proved to be unsuitable for getting any sort of accurate thickness. Although the bar is straight, and tightly clamped to the table, it was slightly bowed up between the clamps. 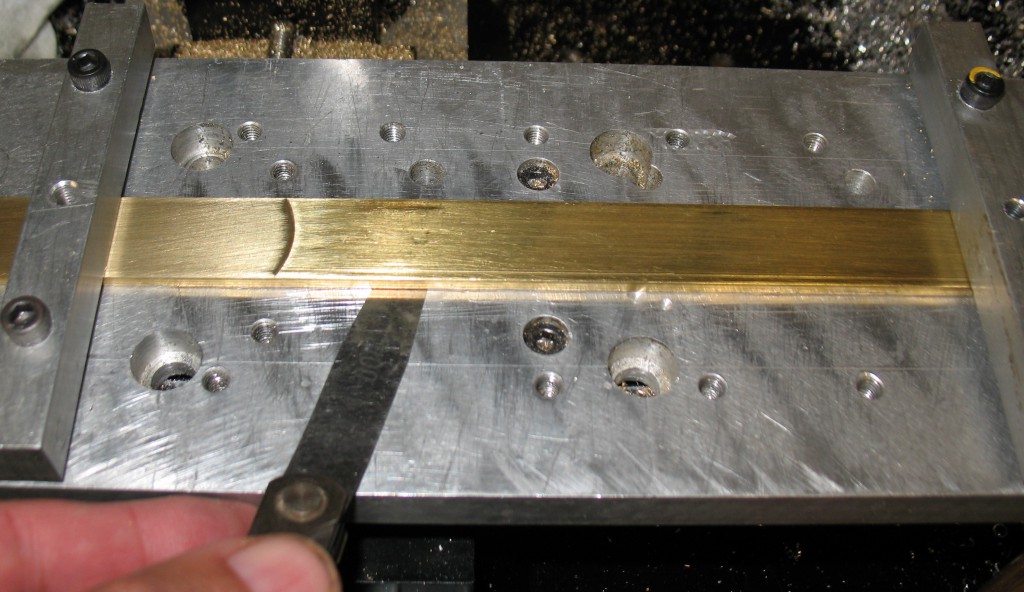 A 0.004″ feeler gauge easily slips under the brass strip near the center.

I’m not quite sure what causes this. It could be microscopic dirt on the table near the clamping bars, or it might be that the table of the mill compresses a bit under the clamp bars, and this compressed material pushes upwards on either side of the bars. It is not caused by the extra length of strip overhanging the end of the mill table, as supporting that made no difference.

Regardless of the cause, this produces uncertain variations in the thickness of the milled strip, since the raised area can spring down somewhat under the force of the cutter. Even if the thickness variation were of a definite amount, having the thickness of the strip vary by several thousandths of an inch would make the matrix blanks essentially useless. They would have to be milled individually to the correct thickness and parallelism (as Jim Rimmer did using his Ludlow Supersurfacer).

I was hoping to avoid one step of piecework, but if the blanks have to be milled individually, there is little point in trying to do this thickness milling before cutting the individual mats.

Perhaps some other way of clamping the strip would work better. This would involve clamping inward against the edges of the strip. The clamp jaws would have to be lower than the finished thickness of 0094″ and would have to be designed to prevent the strip from lifting. Clamping this way would also increase the length that could be milled in a single pass, before shifting the strip along the table.