In preparation for casting last Saturday, I moved a few mats in the matcase I was using so there would be low quads where the ribbon expected them. The ribbon also expected a 10-unit space to exist, so I placed a blank mat there and will have to live with getting a high space. I also swapped the parentheses to match what the ribbon wants.

I covered one hole in the ribbon to convert an exclamation mark into the space of the same width that should have been punched.

I spliced out the two duplicated lines that were still there, and used some tape to smooth out one of the glued splices made earlier. The roughness of the splice seemed to be causing the wrong matcase position to be cast at the start of the line.

The remaining mistakes seem to be actual keyboarding errors which are to be fixed by replacing sorts in the cast lines.

I took the mould apart (but left the squaring plate in place), cleaned all the mating surfaces of the two type blocks and reassembled them.

I checked my metal temperature with a thermometer and found that the controller was reading about 10°F high.

I also checked the overcurrent protection on the motor power source, which had been tripping every few lines the week before. Everything seemed fine, though.

So I started casting again. It took a while to get past the nozzle freeze stage, and eventually I started to have one of the opposite problems, called “bleeding feet,” where molten metal oozes from the foot of the type after the jet is cut off. This produces a blob of metal which leaves the type too high, and often snagging adjacent type as well. The blobs would also force the type channel open as well, allowing other type in the channel to fall over. Once I slowed the caster down to 135RPM this stopped happening and I seemed to be getting good type. Cleaning the mould definitely helped because reduce the presence of fins on the type.

But then the galley stopped collecting the lines of type, leading to a broken part and two hours wasted.

I was also still getting the motor cutting out on me every 4 or 5 lines, and I still don’t understand why. 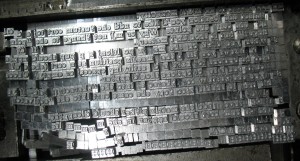 I finally got what at first seemed to be a good forme of type finished (albeit a bit pied by the uneven line lengths), but on closer inspection I found many wrong characters cast. The errors were of a very particular type, though: The character cast in error was always directly above the one that should have been cast. My hypothesis is that, with use, the air pins have become looser and need less air to raise them. When a particular row, say 5, is signaled, the 4 and 6 air pins also rise because of leakage between the air channels just under the ribbon. The matcase always picks the row for the smallest number, and in this case that means one row above the right place. If this is the problem I should be able to fix it by turning the air pressure down. If the problem persists next time I’ll try taking a video of the front pin block to see if the rogue pins can be spotted at work. 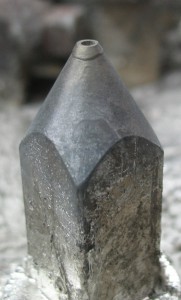 I am still getting metal accumulating under the mould, so before the next casting session I will be verifying the nozzle alignment. I found some type metal adhering quite tenaciously to the hole under the mould and wonder if this could be enough to cause the leakage. I managed to get the metal cleaned out of there.

I looked over the nozzle after giving it a good cleaning and it seems fine. I have never had it this clean before, and now I see that the tip of the nozzle appears to be an insert of some other metal than its main body.