I had many problems with nozzle freeze. On each casting cycle, the nozzle, which is the outlet of the metal pump, rises to seal against the opening on the underside of the mould, the pump stroke occurs, and the nozzle drops down again. The nozzle is heated by conduction from the molten metal in the pot, and also by the molten metal that pumps through it. It is cooled somewhat by radiation and air convection, but primarily by its periodic contact with the mould. The nozzle movement is adjusted to minimize the time it spends seated in the mould while still sealing against any pump pressure that might exist.

A nozzle freeze occurs when the metal in the nozzle solidifies before the mould is full and fails to melt again before the next casting cycle. At that point, there is no metal flow to heat the nozzle and the temperature drops quite a bit. The immediate cure is to turn off the pump so the nozzle can thaw again by heat conduction from the metal in the pot. Needless to say, at this point the cast line has lost some types.

Converse problems which can happen include leakage around the nozzle when the pump stroke occurs while the nozzle is not properly seated, deformations of the type body if the metal in the mould cavity had not solidified quickly enough, or mould damage or incorrect type dimensions caused by the mould overheating.

Leakage around the nozzle is caused by:

Deformed type and signs of mould overheating are caused by:

As you can see there is a balancing act between these two limits. Controlling mould temperature in particular requires ongoing monitoring of the cooling water, plus remembering to turn it on and off when the casting is started and stopped. At least the pot temperature and casting speed are regulated…

One thing Monotype did to help with freezing was to introduce nozzles made from stainless steel, which has only about half the thermal conductivity of regular steel. Although this means the nozzle gets less heat from the pot, it also means it loses less heat to the mould. Unfortunately I don’t have one of these, although I have the shop drawings and could make one if I felt I really needed it. 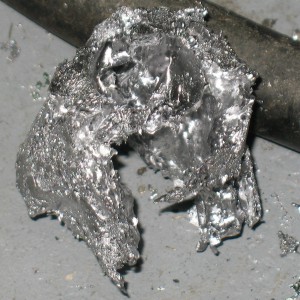 During my casting efforts on Saturday it was clear that the nozzle and pump timing were off because I was getting huge deposits of hardened type metal under the table around the nozzle. The photo shows one of these lumps once I had pried it out. Near the center top of this lump you can sort of see the shape of the cone hole on the underside of the table. At the point I removed this the lump was bulky enough that it hung on to the nozzle as I cranked the pot down to clean up.

On Sunday I got the nozzle and pump timing adjusted so these nozzle leaks did not occur, but then I was confronted with constant nozzle freezes. I eventually got the caster to run without freezes by raising the pot temperature to 690°F (which I think it pretty high for Linotype alloy), running it at 120RPM, and keeping the cooling water off completely.

Although I managed to finish the casting (only about 12 lines), I had several signs that the mould was running very hot. One was that, after ending the casting run I ran some cooling water and the water leaving the mould circuit was steaming hot. 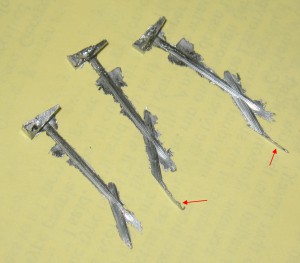 Another is that the air vent added to the mould by Hartzell was filling completely with metal and in fact spurting out a bit of metal.

I mentioned this vent while describing the mould refurbishing, and this photo shows the tomahawk-shaped jets that are formed. The red arrows point to the area where molten metal was spurting out. Normally the metal should harden partway along its flow through this channel.

There is also quite a bit of flash on these, indicating that there is some excess clearance in this part of the mould (where the bottom plates of the crossblock press against the squaring block).

So far, before another casting run, my action items include: