[Note: Please read the comments below regarding the struck-out text]

We have recently upgraded from our Challenge model 265 26” guillotine to a 32” one of even older vintage. We use it to cut up pulp sheets to make them easier to ship, and the 26” one was not wide enough to accommodate all the pulp sheets we stocked.

So the 26” one is now up for sale. It has power cut and power clamp, both driven hydraulically by an electric motor. The motor requires a 3-phase 208-volt supply and draws 11 Amps at 3HP load. Since we moved to our new location, which does not have 3-phase power I have been using a VFD (variable frequency drive) also known as an “inverter drive” to run it.

As a result I am offering to sell this re-wired to convert it back to 3-phase leaving the buyer the option of replacing the motor with a single-phase one (cost: about $400), or using a static or rotary phase converter. The manual for the machine lists a single-phase 5HP motor as an alternative to the 3-phase 3HP motor,

In any case here are some photos of the machine:

Both the clamp and the knife have dual controls which require both hands to operate, and releasing the knife controls immediately causes the knife to rise back to its idle position.

The machine is sitting on a dolly that I made which allows it to be moved on a smooth hard level floor. A spare knife is included along with the original manual. 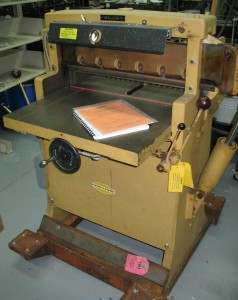 Comes with the original manual, spare knife, and manual for the VFD. 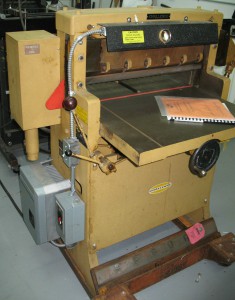 The large grey box is the VFD 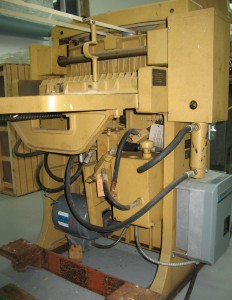 Rear view below the table showing motor and hydraulic controls. 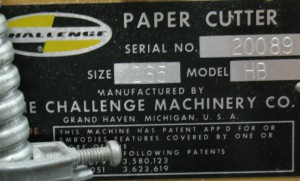 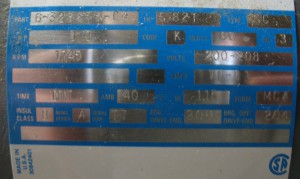 Just yesterday at auction in Goshen Indiana another Challenge 265 sold for US$1350 plus 8% buyer’s premium—that’s $1458 even before taxes. This was a newer model with a deeper and wider table on the operator side and grey paint instead of yellow, and apparently more modern controls.

We have facilities to load this into a truck or trailer and can also mount it on a pallet. If you want it shipped we would hire a professional company to crate it at your expense.