I happened to be in our shop for a few minutes, standing at the desk, when I saw what at first I thought to be a bit of cat hair floating around the top of the computer that sits on the desk.

I quickly realized that it was smoke so I immediately unplugged the power cord from the rear of the computer. This is a medium tower enclosure and it was sideways, against the wall at the back of the desk so the power plug was readily reachable. 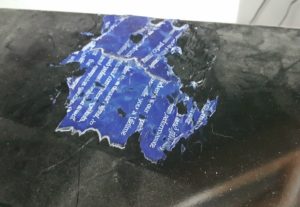 The smoke did not seem to be abating, so I removed the side cover. This was again easy because of the position of the computer. At the very top of the case, there was a small flame burning, so I blew it out.

The source of the fire was the SATA power cable adapter on the DVD drive. This had somehow shorted out and started burning, also destroying the DVD drive and its SATA data cable.

Fortunately, the drive was in the top bay so the soot from the fire did not enter the rest of the computer. However, the heat from the shorted wiring set the soundproofing lining of the top of the case on fire. This is what was burning when I opened the case. 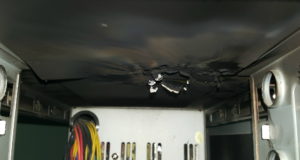 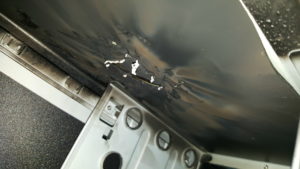 Burnt soundproofing liner, seen from the side

Once I removed the DVD and wiped up most of the soot, the computer powered up and ran fine. We don’t use the DVD at all so that is no great loss.

I have to wonder, though, what would have happened if I hadn’t been there to notice the smoke. Would the fire have gone out on its own (though possibly destroying the computer), or would the stuff on top of the computer caught fire?

This is the second incident I’ve run into with a SATA power cable overheating where it plugs into the drive. The previous incident was just a flash and pop, damaging the drive terminals a bit (but not beyond usability). This time my assumption is that a bad connection to the DVD initially caused the terminals to heat up a bit, thus making the connection deteriorate a bit, leading to more heating, and so on, until there was enough heat to melt insulation and allow the wires to touch, starting the fire. I would not expect an idle DVD drive to draw enough current to start such a chain of events but apparently it is.

The amount of current drawn by the shorted wires was not enough to shut down the power supply, another event which could have saved things. Unfortunately computer power supplies only monitor the overall current, and not the current to the individual power connectors, thus making them able to easily overload the wires on one power connector without shutting down.