I think this is the last thing to do before trying to cast the ribbon on my Monotype: Cleaning the old 10 point composition mould so it works at top performance.

This particular mould is a 10 point serial number 3E1046H. It is essentially the composition mould design used by Lanston Monotype, but as indicated by the nameplate and the ‘H’ on the serial number it has been reconditioned by Hartzell Machine Works, who for many years repaired Monotype moulds. One visible change Hartzell made was to add an air venting passage to the jet so that at least some of the air could escape the mould cavity rather than having to be compressed into trapped bubbles. This means this mould should eject the tomahawk-shaped jets characteristic of this modification.

The exploded diagram for this mould is shown on page 38 of Plate Book, Monotype Typesetting Machine, the Composition Type-caster. The only difference I could find from what is shown in the manual is that this mould does not have the left mould blade guide 18MC3E1 nor its screw, nor even the hole in the top cover to clear the screw head (so it is not just a case of a missing part). Furthermore, the mould blade latch spring on this mould is a single piece with the end loops formed by bending the spring wire, while the parts manual shows a spring with separate end eyes that the last coil of the spring threads into.

On disassembly I found that all of the cooling water passages were plugged with rust. I would have liked to remove the four plug screws so I would have full access to all the passages to clean them out but these plugs refused to budge, even using an impact screwdriver on them. Although I could drill them out, clean out the scraps, and make replacements, I will first try other means to clean these passages. Perversely, the two plugs in oil passages, which seem perfectly clear, came out easily.

It is not necessary (nor even advisable) to disassemble the mould to this extent for normal cleaning, but I wanted it to be as factory-fresh as it could be. Besides, if I destroy it, Don Black has several other moulds of the same size that I could use. YOLO, as they say. 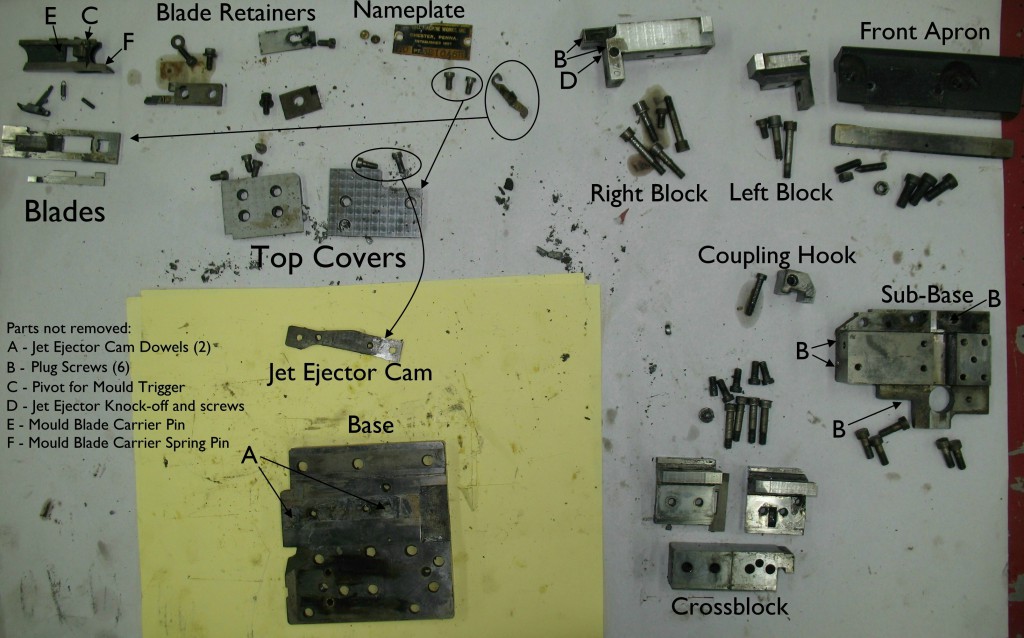 As annotated in the photo, a few parts were left to be disassembled when the photo was taken. I have now removed items C and D and two of the plug screws B (the ones in oil ports). The remaining parts are too hard to remove or might be too hard to reinstall.