Posted on 2013/04/24 by kpmartin Posted in Beaters, Pulp preparation

For beating some papermaking fibres, a Hollander beater is essential. One of the brands preferred by hand papermakers is the Valley Beater, originally made by Valley Iron Works, but still available new from Voith-Sulzer (last time I checked). They are generally available used for 2 or 3 thousand dollars, but new ones are over $10,000. They were originally designed for use in the laboratories of commercial paper mills for testing pulp and determining how the main batch should be processed in the large production equipment. Because they were intended as a lab instrument they can essentially be kept running forever, although parts are becoming more expensive as well.

Most of these beaters have a painted cast iron tub, but ours has a bronze tub and the naked metal to show it off. We have it on casters so we can roll it out of the way when not needed. 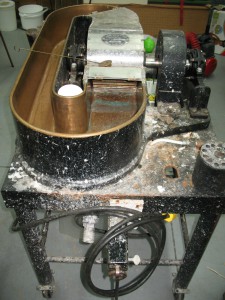 From this end you can see the roll which drags the pulp under itself to bruise and scuff the fibres with minimal cutting. 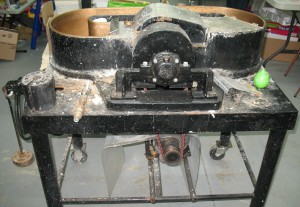 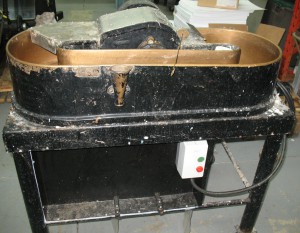 This side of the table has a metal box below containing the contactor (in a waterproof case) to operate the motor. Eventually the water connection will be here too with the control valve and a hose with sprayer will be coiled up, ready to help rinse out the tank at cleanup time. 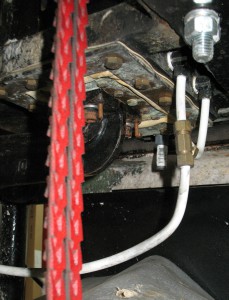 This shows the diaphragm (which allows the gap the fibres run through to vary) along with the white plastic water lines connecting to the two flushing connections. The red bands are link belting running from the motor to the beater rather than a regular V belt.

Because the water supply lines go up to the tabletop, the area around the diaphragm cannot easily be emptied. I eventually plan to run the water line down into the box that already contains the motor switch and have the hose connection there. In this way one can disconnect the hose and drain the beater a little more fully. I will also add a short hose with a sprayer to help with rinsing out the beater tank when the time comes to clean up.