This is a press which I made for Audrey even before we bought the Papertrail; we have since stopped using it and sold it. The following details are drawn  from memory so dimensions might not be exact. 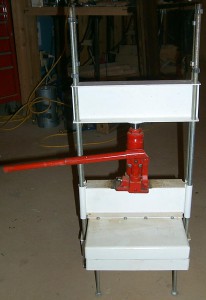 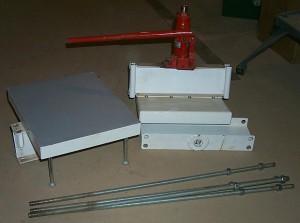 The cross-beams were steel I-beams with holes drilled in the upper beam, guide tubes welded to the upper platen beam, and joining nuts welded to the lower platen beam. The 11×13″ platens themselves were 1½”-thick maple made by gluing together lots of 1×2’s, with plastic laminate (“Formica”) on the working surface. Four long carriage bolts acted as legs and feet, and four threaded rods held the tension between the upper and lower beam. A small bottle jack (perhaps 2 tons) supplied the pressure. Most of the parts were painted with white epoxy bathtub paint.

This press did the job for several years, and I used some lessons learned in designing our next press. The main problem with this press was having to spend what seemed like an eternity screwing on the threaded rods and the nuts that held the upper beam. Rust developing on the rods did not help either. As well, although it could be broken down into pieces, they were not as portable as we would have liked. In particular, the jack base was tack-welded to the upper platen beam, making a single piece that was both odd-shaped and somewhat heavy.