This week we had to get a fresh bale of bleached abaca pulp down from the upper tier of the racking in our store. This meant clearing a path for the forklift, which in turn meant moving almost everything.

We took the opportunity to sweep the floor and, more importantly, move the Thompson press to its eventual permanent location. Every now and then up until now we have moved the press a few feet when the next obstacle had been removed. It is too heavy for the forklift but our pallet jack can raise it just fine. Unfortunately, the floor has a slight slope and the Thompson had to move up the slope, so we were unable to budge the press in the desired direction. I had considered pushing it (still on the pallet jack) with the forklift but that did not seem very safe because someone still had to steer the pallet jack and that person would be between the press and the forklift.

I settled on using a come-along winch to pull the press up the slope. We hooked a chain around our working guillotine (as opposed to the unused for-sale one) to act as an anchor. The come-along cable was not quite long enough, and I had no other long chain or cable, so I hooked a second come-along in series, with its cable tied around the base of the pallet under the press. 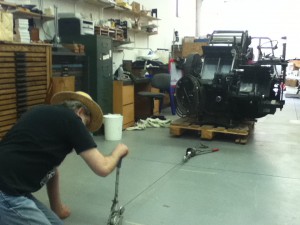 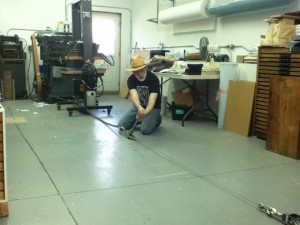 It was a sunny day where we had been working outside and I forgot to remove my hat when I started on this job.

After using up all the length of the come-alongs I reset the chain around the guillotine and pulled the press the rest of the way, with Audrey steering to get it as close to the chalk lines on the floor as possible.

The press remains on its pallet, but at least now we can get some feel for the amount of space around it. If we haven’t bumped into it too many times, later this year I will make a raised and, more importantly, level concrete pad for it to rest on and we can finally install it and bolt it down. The bolts are certainly not to stop it from floating away, but to stop it from slowly walking off its spot when in use.