Over the past year or so I’ve purchased more composition matrices and so far they’ve been sitting on the floor, in the way, in the boxes they were shipped in. 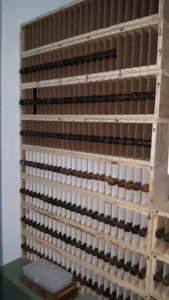 The top four are the new ones

Last week I made four more cases to hold them, to match the 7 cases I already had, for a total of 11 cases each capable of holding 24 matcases. For lack of a better location, I just placed them on top of some of the older cases, and promptly filled over half of them.

Yes, I got one of the partitions installed backwards. So sue me.

These matcases are still only identified by which case slot they are placed in. The actual markings on the cases are somewhat random based on where they came from. I think what I will be doing is placing my own serial number on each matcase, and recording on the computer what faces are in each case, along with the arrangement used.

Many of the new matcases have only a single font loaded into them. This is particular true for faces like the Gothic faces which do not include small caps or italics, so there are only two alphabets (uppercase and lowercase), one set of figures, and points, or around 72-80 matrices. The remainder of these matcases are filled with junk matrices: cellular mats for fonts that are too small or too worn out to be useful. You can leave an empty position in a matcase but if you accidentally try to cast that position in the matcase, you get a real mess of a squirt to clean up in the caster, so filling with mats—any mats—is well advised. As I was loading these matcases into the storage cases I was wondering if these junk mats actually held any treasures…

I have a few empty matcases around, and a few fonts of cellular mats that are just in boxes, so I may be loading a few more matcases later.