Finished paper from the Washi Workshop

Posted on 2013/07/07 by kpmartin Posted in Hand Papermaking, Kevin, Our own courses and workshops — No Comments ↓

Here are some photos of paper made at our recent Washi Workshop. 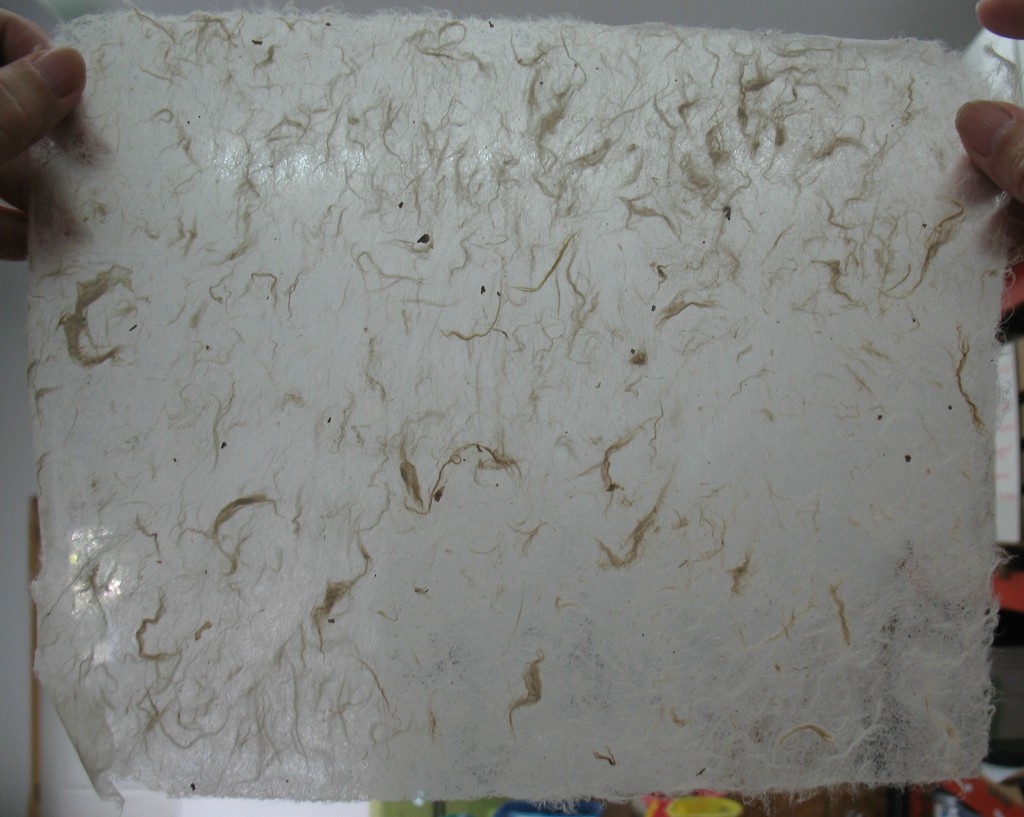 This is the sheet that was made using the western-style technique of a single dip in the vat and letting all the water drain through the mould screen. I had a piece of no-see-um netting over the mould and the paper was dried on this netting as we found it impossible to couch off. The sheet curled a bit when we peeled it off once dry but other than that it is a fairly nice sheet. 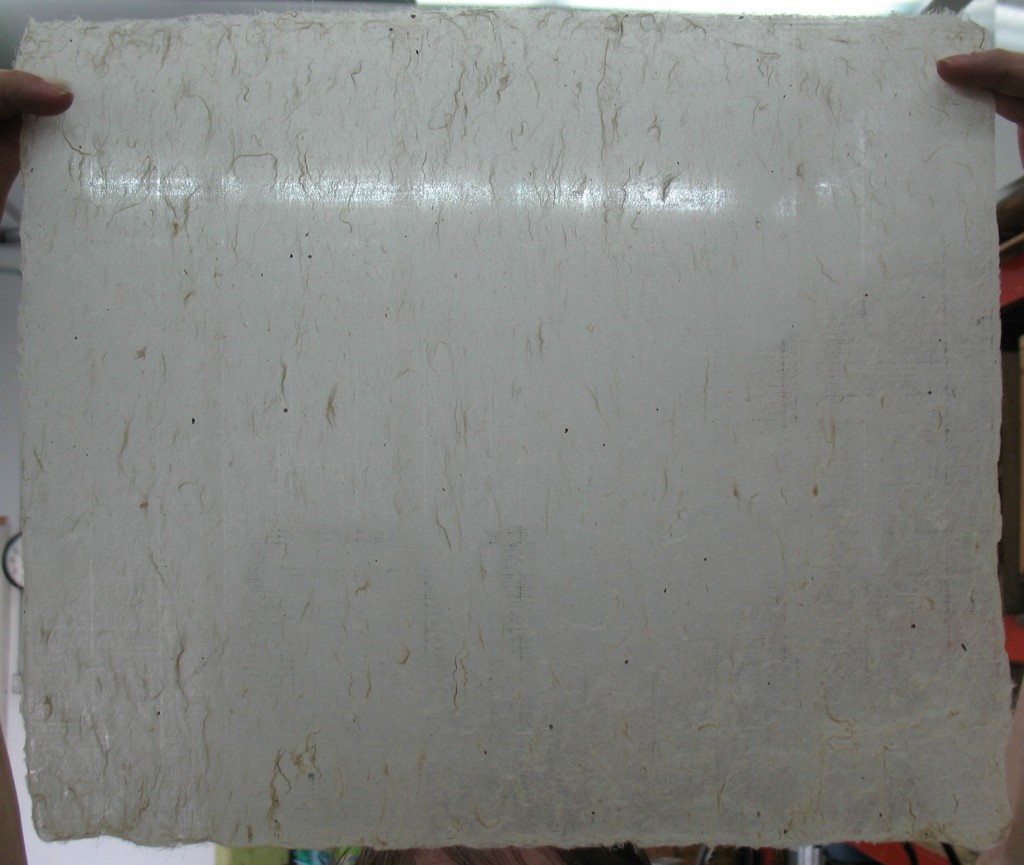 This is one of the 3 or 4 good sheets we got from the batch, probably one I made later in the evening after the workshop was done. It is very light, evenly thick, although it seems to show shadow lines from the ribs in my keta.

Many of the sheets showed one of more of the flaws in this sheet. The most obvious one is the hole near the lower right. The heavy bottom edge seems to result from a combination of insufficient formation aid and incomplete throw-off of the pulp from one dip, leaving a roll of fibre at the edge of the sheet. The thick line a few inches from the top of the sheet, and the thin area above it (often to the point of having holes) seem to be due to poor motion when picking up a fresh scoop of pulp, causing the first few inches of the sheet already formed to bunch up.

My habit is to scoop new pulp on the near side and throw off on the far side, so these two flaws always appear on the same edges of the sheet (although they don’t necessarily appear together). The thick far edge may also be the result of working one scoop of pulp too long, leaving too little water and too much fibre in the su, preventing a clean throw-off. This may be why more formation aid helps, as this would reduce the drainage rate of the pulp and keep it free-flowing longer.

One sheet ended up double thickness because I forgot to put the separator thread between the sheets.

Most of the initial sheets in the post had holes or came off in tatters because the sheets were not couching off the su properly. I wonder if I should start my post with a sheet  from a previous batch so the top of the post can provide the right amount of cling for the sheet on the su.

The western papermaking that was also taking place as a diversion from making the washi resulted in a stack of 8½×11″ sheets in a light blue-gray with a speckle to them. 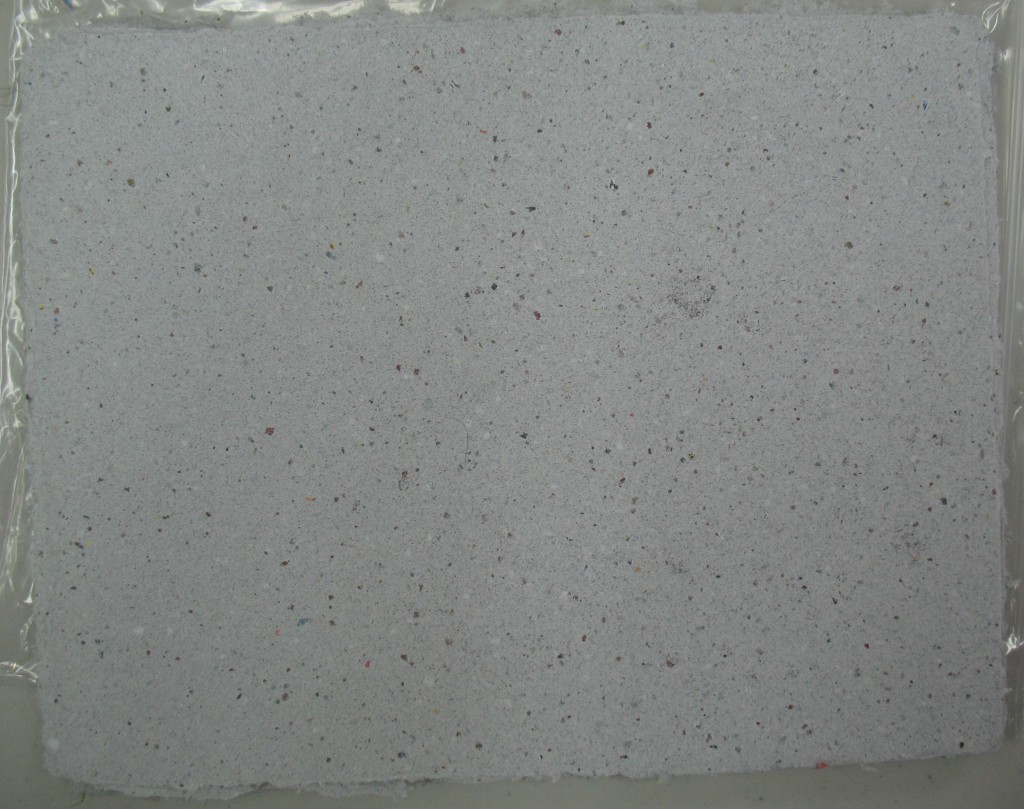 This was the western-style paper people were making as a diversion from the washi. It is made with recycled brochures resulting in a light gray paper with dark specks.